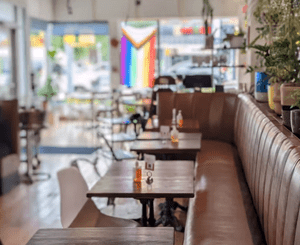 Photo: Courtesy of The Queensboro

By Erin Flynn Jay | What are restaurants doing now to get creative for more revenue and customers? Mark Moeller, national restaurant consultant and owner of The Recipe of Success, said workspaces are certainly one way to get more creative, though this concept seems to be better received in the larger cities.

Other ways restaurants are getting creative include bottling fan favorite recipes (such as hot sauce, salad dressings and sauces) and selling them online and in the restaurant, Moeller added. Some have developed a merchandise program that’s fulfilled online with companies like Teescape.

“Many restaurants have also leaned on what they do best – deliver a great guest experience,” said Moeller. “Sometimes this means improving training, reducing the menu, and others change the concept to streamline operations while staying on brand.

”The Queensboro, a neighborhood restaurant and bar in Jackson Heights, Queens, N.Y.C., recently found its own unique idea for increasing customers and revenue, as well as supporting the local neighborhood, with a community workspace that’s available at a cost per day.

The Q Home Office is the new pop-up office space inside The Queensboro that’s available to the public for $20 per day from 9 a.m. to 5 p.m.

‘The Idea Was to Help Our Neighbors Out’

Queensboro Co-owner Dudley Stewart said the workspace idea came about during the COVID-19 pandemic when he realized a lot of people were suddenly working from home who hadn’t done this before, and they were in situations where they might not have been set up to work properly from home.

“Maybe they have a lot of people living there and they don’t have any privacy,” Stewart said. “Since everyone was stuck in their houses for so long, we thought it’d be nice to give people an opportunity to get out of the home, almost like a commute to a place nearby. You still feel that you started a day of work, and it puts you in a different mindset. So, the idea was to help our neighbors out and offer somewhere nice to work.”

Generally, people arrive around 9 a.m. and stay until 4 or 5 p.m. Sometimes they’ll stay on for dinner or they’ll have a drink after they work. But for the most part, Stewart said patrons are done by then and go home.

‘People Know What They’re Getting Is Something Simple and Useful’

Stewart advises restaurant owners who are interested in opening workspaces to keep it as simple as possible and charge a low fee. “You don’t need to offer much to people other than Wi-Fi, a welcoming environment, and a quiet space for them to be,” he said. “We also include tea and coffee. That’s something that’s definitely a bit of a bonus for the people who are here.”

Stewart revealed that there were no challenges in setting the workspace up. “We haven’t run into any problems at all. It’s been very smooth,” he said. “If we priced it higher then people would’ve had higher expectations for it, but we’re a very casual restaurant and a neighborhood restaurant. People know what they’re getting is something simple and useful, but nothing particularly fancy.

Moeller said it was a brilliant decision for The Queensboro to add a workspace with a fee to use. “The combination of a fee-based structure with an unused dining room enables them to increase revenue and, more importantly, raise awareness of their brand while becoming more involved with the community,” he explained.

“Restaurants live and die by their level – or lack thereof – of involvement in and support of their local community. They provided a solution during one of the most difficult moments of our lifetime.”

Moeller’s advice for restaurant owners and operators who aim to open similar workspaces for customers? Be methodical and have a plan. “Understand what impact a workspace will have on the bottom line,” he shared. “A high level of guest service is vital to execute; people will be more critical of this one-off venture – you cannot make it look like a money grab.”

To make a workspace inside a restaurant work, there needs to be real value and the space cannot look like an afterthought. “The space needs to be prepared to handle this new business – are there enough outlets, USB ports, and is the Wi-Fi sufficient for the new load?” Moeller said. “Find an unobtrusive way of capturing email addresses and other identifying data, so that you can stay in touch with your guests. A branded portal for the Wi-Fi is a perfect way of not only capturing this data but also a place to explain the user agreement the restaurant should have.”

Bar and Restaurant: What Lessons Can Be Learned from the Recent Grubhub Promotion...