CT Examiner: Restaurants are Forced to Adapt to an Uncertain Future 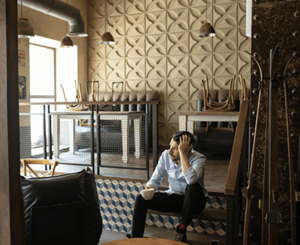 By Cate Hewitt | As the restaurants struggle to stay open and adapt to an uncharted future social landscape and uncertain timeline, the state-mandated closure of full-service dining rooms has decimated much of the foodservice industry.

Since March 16, when Gov. Lamont’s ordered a halt to eat-in service at restaurants across the state, restaurants without a substantial preexisting takeout business have seen a drop in sales of between 70 and 90 percent, said Scott Dolch, executive director of the Connecticut Restaurant Association by phone Monday.

Dolch said that in Connecticut 8,500 restaurants employing about 160,000 workers make up 10 percent of the state’s workforce.

“A lot of restaurants have tried to pivot to try to make it work with takeout and curbside but when you think about making it work, especially with those numbers, there’s no such thing as profiting or being successful,” he said. “They’re doing it as a way to keep a couple of people on staff to continue to support the community.”

Some restaurants are offering family-style and are “getting creative” with menu options. But, after a few weeks of trying to make it work, some owners have decided to close and wait it out, hoping to reopen when the time is right, he said.

Robert Marcarelli, operations consultant with Pi LLC, a restaurant consultancy firm in Madison, said the restaurant environment has been in a constant state of flux since the ordered shutdown.

“It’s not even day by day, it’s hour by hour. I think in the very beginning, no one understood how long this was going to go for, and I think it was a difficult decision because now, a month later, we still don’t know,” said Marcarelli, who is also director of operations for Liv’s Oyster Bar & Restaurant in Old Saybrook, and owns Business Service Group, a buying concern and marketing technology consulting company specializing in restaurants.

He said several of his restaurant clients could not make the transition to takeout and closed their doors when the state order was issued.

“It’s really a mix, it’s not just fine dining. Some casual restaurants just closed doors because the majority of it came from payroll. They made a determination that they couldn’t operate on takeout revenue alone,” he said.

Even trying to make that transition to takeout could create problems in the future, said Mark Moeller, owner of The Recipe of Success, LLC, a restaurant consulting group in Westport.

“The first thing they have to decide is whether or not the new model makes sense for them in their current concept,” Moeller said. “If you’re a fine dining restaurant and you’re trying to stay afloat and keep people employed, and you’re utilizing UberEats and curbside pickup, and these things were never part of your model, to begin with, then you could potentially be causing some issues for yourself later on when people go back to what will be the new norm.”

One of the biggest hurdles for restaurants even before the shutdown was the slim profit margins that make it difficult to take on debt and recapitalize, said Dolch.

“Yes, you can get loans to cover costs, but all you’re doing is deferring more and more debt down the road that you have to pay back. Restaurants do run on thin margins. The national average for a restaurant profit margin is three to five percent,” he said. “That’s my concern, is giving them an opportunity to get back on their feet and not have the debt hanging over their head and to be able to be successful whenever we do reopen,” he said.

The federal loans through the Small Business Administration, including the Paycheck Protection Program, known as PPP, and Economic Injury Disaster Loan, or EIDL, are not suited for the restaurant industry’s pay structure and needs, especially considering the unknown length of the shutdown, according to Dolch.

“They’re going to need support to get through this on both a federal and state level,” he said. “This is not going to be a couple of months and we’ll reopen. It’s going to be years as they’re going to have to deal with these burdens and the terms of these loans, it’s months and years to come.”

For some restaurants, the wiser decision will be to close for the time being, said Moeller, adding that he expects that 20 to 30 percent of restaurants will close permanently.

“They were undercapitalized and lacked the resources to be able to revamp, even with the loans that are coming out,” he said. “The SBA loans are credit-driven. A lot of restaurants, especially the smaller ones, run on poor credit or COD or very short terms. A lot were probably struggling even before the virus hit. It’s sad, they’re just not going to be able to regroup and come out of this.”

The restaurants that have pivoted to takeout and delivery are “probably breaking even or less,” said Marcarelli.

“Nobody is getting rich in restaurant business right now. They’re just trying to stay afloat, keep their employees paid and hopefully pay their bills,” he said.

An added difficulty is that full-service restaurants trying to adapt to a takeout and delivery model are entering an over-saturated market, said Marcarelli.

Marcarelli said he is already seeing the business start to shake out.

“Over time, some restaurants have closed and the market saturation is coming down.”

Marcarelli said that fine dining had already declined significantly over the last five years due to the high costs inherent to the business model.

Dolch said “fast casual” restaurants have been on the rise since well before the shutdown.

Moeller said his full-service restaurant clients have had to quickly revamp menus to accommodate the takeout model.

“We have to take a hard look at their food and whether it would actually travel in a takeout and delivery mode,” he said. “Their food was designed to be eaten, or start to be eaten, within the first five minutes of receiving it.”

Some restaurants are preparing family-style meals for takeout. Others are serving a core menu and offering specials because trying to maintain the previous full range of menu choices is not feasible, Moeller said.

“Restaurateurs are always worried about satisfying every mouth that comes in that door, but we remind them it’s all about stability and sustainability. You have to adjust your business, within reason, to accommodate what the new norm is,” he said. “If you want to stay open then you’re going to let go of old methods and your old thought process. You have to let your ego go. You have to go back and look at product mix and find out what’s really going to sell but also what’s going to be profitable for you.”

Even fast food restaurants need to be innovative with menus and food items, Moeller said.

“You have to keep reinventing yourself, that’s the key point, but you always have to stay within your brand,” he said. “If you’re a burger joint, do not introduce sushi. It’s not going to work. You’re going to have a brand identity crisis, it doesn’t matter how good the sushi is.”

With the uncertain timeline, until restaurants can reopen or resume full service, Marcarelli said he is encouraging his clients to create a recruitment plan, because qualified employees will be scarce.

“When we come out on the other side, everybody will be fighting for employees,” he said. “That’s a scary thing for restaurant owners, it’s the number one hindrance because nobody wants to do the restaurant industry anymore. No one wants to go into a kitchen that’s 100 degrees and cook.”

He said graduates with culinary degrees have shown greater interest in corporate food service with jobs that require 50 hours per week or less.

“They don’t want the 100-hours, seven-days-a-week jobs, it’s not acceptable anymore. The culture has changed throughout the years,” he said.

Dolch said recruiting new employees in the restaurant industry has been an ongoing challenge in Connecticut, but he hoped the workers who had been laid off would return.

“When you look at the pride and passion that employees have for the restaurants they work in, I’m hopeful that when we do look to reopen that people will want to come back and have that opportunity to take those jobs,” he said.

A question of capacity

The state order to stay closed extends until the end of April, but Marcarelli said he believed takeout and delivery will continue into May or June. After that, he said it was unclear whether restaurants would be allowed to fill to their full-seat capacity given possible longer-running orders to create social distance.

“What happens when the ban comes off? Are restaurants at 50 percent or 25 percent capacity? There’s no direction on any of that,” he said.

With the approach of warmer weather, outdoor dining may provide a way for restaurants to increase capacity while implementing social distancing, but municipalities will need to support the idea with zoning waivers, Dolch said

“People feel more comfortable outside than they probably do inside of a small restaurant,” he said. “We care about people’s safety and we do want to see the curve flattened.”

“It’s too early to tell. We just don’t know what’s going to happen,” he said. “You have to be careful about what you’re going to do. Let’s say we come out of this in two months when people start to trickle back. What you do in two months is going to be completely different from what the guest patterns are going to be in a year.”

Even when restaurants are allowed to reopen, some form of social distancing will likely be required for a period, he said. For example, new regulations could allow a 75-seat restaurant to be filled halfway initially and then increase to capacity in a year.

“The new norm is people are going to be more cautious, no matter what,” Moeller said.