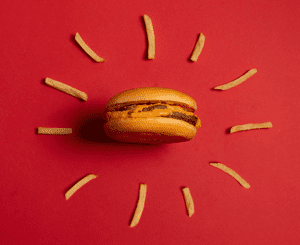 By Steven T. Wright | If you’ve ever had a hankering for a Big Mac in Orlando, Florida, there’s a good chance that you wandered into a very special McDonald’s. With its hideous red-and-yellow checkerboard exterior and its neon-lit french fry monolith, the so-called “World’s Largest Entertainment McDonald’s” (now known as Epic McDonald’s) bears down on innocent customers like a monument to bad taste.

But while that McDonald’s might not win any awards for its architectural prowess, it at least lingers in the imagination. The muted colors, large glass windows, and overall boxy appearance of a modern McDonald’s are forgettable, and a far cry from the garish red-and-yellow buildings that many recall from their childhood. Slowly but surely, fast food restaurants are giving up their once brand-defining facades to follow in the path of “fast casual” eateries like Chipotle, which have become much more popular over the years.

While this standardization might make good business sense for a style of dining that is sometimes seen as out of fashion or simply outmoded, some in the industry wonder if the company has lost something in the process of turning its back on its McDonaldland origins. As enthusiasts like Max Krieger attest, characters such as Ronald McDonald and Grimace might seem dated now, but they at least provided an identity for the brand that was original and appealing — even if only to its target audience of children and parents.

Krieger is a game developer from Pittsburgh who runs a popular Twitter account that documents unusual or downright tasteless McDonald’s restaurants from across the world. The “Nonstandard McDonald’s” account has managed to garner more than 150,000 followers in just a year. But while he takes a certain amount of glee in documenting these strange buildings, he doesn’t call himself a McDonald’s fan — the account’s Twitter bio jokingly refers to its mission as “preserving the only architectural heritage of the western world.”

“One of the things I really try to be clear about is, ‘Hey, we don’t stan a massive corporation,’” Krieger says with a laugh. “I was just surprised at how hard it was to find photo evidence of these weird McDonald’s that I had been to a couple of times, including the so-called Mayor McCheese mansion in Independence, Ohio. … One thing you figure out very quickly is that most of these places are no longer operating. They’re defunct.”

Many of these offbeat McDonald’s were pilot restaurants for culinary concepts that were eventually abandoned by the corporate mothership, such as “McDiners” that served classic greasy spoon fare. Others were the result of creative franchisees who wanted to make their restaurants stand out from the crowd, such as the aforementioned World’s Largest Entertainment McDonald’s in Orlando, which featured a truly disturbing hand-drawn mural of Ronald McDonald’s electric-yellow hands gripping the world. (“It’s like something out of Judge Dredd,” Krieger observes.)

Today, the revamped Orlando location has shorn its checkerboard exterior for a more standard appearance, though it still boasts its signature neon lighting. Viewed side by side, the two images are a testament to how much the company’s franchisees have modernized their restaurants in the past decade in response to prevailing trends. Krieger in particular points to the negative PR fostered by the book Fast Food Nation and the documentary film Super Size Me as damaging the family-friendly reputation of McDonald’s, which forced the company to change its image in order to appeal to an older clientele.

Chef and restaurant consultant Mark Moeller fondly recalls family outings to Mickey D’s with his five siblings when he was growing up in the ’80s. These days, though, he says fast-casual eateries largely serve the same purpose as quick-service restaurants (or QSRs, an industry term synonymous with fast food). Customers are looking for healthier options than your classic calorie-rich burger and fries. The gimmicks that had once brought droves of kids swarming in are now a liability, making the restaurant seem dated and cheap in comparison.

“The original thought with restaurants like McDonald’s was to aim at a family audience, so you could get customers for life,” Moeller says. “That’s what drove the playgrounds and the toys, all very kid-friendly stuff. Over the past few years, they’ve decided to become more adult, with clean lines and colors that will appeal to you while you’re eating. No more of those hard chairs that are designed to get people up and out for the sake of throughput. They try to make it comfortable so older adults from 30 to 60 can go in and feel comfortable enjoying the fast food they grew up on but in a more welcoming environment.”

From an industry perspective, Moeller feels that fast food restaurants are somewhat confused about what audience to attract. As many fast-casual restaurants continue to use the assembly line model popularized by Chipotle to deliver the convenience factor that undergirds all “fast” restaurants, it’s unclear exactly what older brands like McDonald’s can do to compete — other than following in their footsteps. In Moeller’s opinion, the company has removed so much of its legacy branding that it seems almost generic. During a recent move, he happened to find some of the old McDonald’s figurines he collected as a kid, and it reminded him of pleasant afternoons spent eating at the restaurant with his family.

“There’s a lot of nostalgia there for me, but I definitely think it’s missing in its current form,” he says. “It’s hard for me to imagine a kid going to a modern McDonald’s and forming memories like that today. They’ve lost sight of what makes their brand unique.”

Like Moeller, restaurant architect Glen Coben also has a certain amount of nostalgia for old-school McDonald’s. For Coben, McDonald’s is synonymous with the automobile society produced by 20th-century American capitalism, with the golden arches serving as a miniature roadside attraction that could catch motorists’ eye when they’re flying by at 55 mph. (Similar roadside attractions include the world’s largest yarn ball and “Lucy,” the elephant statue in Atlantic City.) When it comes to modern fast food, however, Coben agrees that the visually arresting quality of those early restaurants has fallen by the wayside, and they’ve lost their identity as a result.

As Coben attests, this visual homogenization — or Chipotle-fication, if you will — is marked by exposed lighting, comfortable seating, and antiseptic steel surfaces. (Perhaps the most telling detail: The double-sloped mansard roof that was long associated with McDonald’s has largely become a thing of the past, much like the red roof of Pizza Hut.) This shift is hardly unique to the yellow arches. For example, Taco Bell has recently moved away from its sloped roof and colorful logo to embrace the boxy-building concept as well.

“One thing that I’ve learned in the industry is that fast food restaurants are essentially just designed in a lab to produce the biggest returns possible,” Coben says. “When I look at fast food restaurants today, that’s exactly what they look like. They’re soulless. … As an architect, it just seems unfortunate that these buildings don’t look interesting or reflect the concept of what the restaurant is about. Their idea of a concept is, ‘Oh, we want it to look clean.’ Well, a well-lit, antiseptic environment is not a concept. It’s just nonexistent.”

Coben compares the current boxy, sleek designs of fast food restaurants to cavernous sports stadiums that were built in the latter part of the 20th century, such as Philadelphia’s Veterans Stadium, which was demolished in 2004. In his mind, entrepreneurs are aware that customers prefer a more focused concept even in their casual dining, and that’s why so many fast-casual restaurants have sprouted up in recent years to compete. However, that doesn’t mean that all of those concepts will be successful. “When you start seeing Edison lightbulbs and reclaimed wood in the big chains, that’s when you know that trend is pretty much done,” he says. “There’s a big lag that happens there.”

Jessica Farrell is an archivist who worked for years at the Golden Archives, which is McDonald’s official corporate library and history center. To Farrell, the uncanny appeal of the “nonstandard” Mickey D’s is a symptom of the tension that runs throughout the company’s corporate history: diversification versus uniformity. She points out that the concept of a nonstandard McDonald’s is in itself a contradiction — enthusiasts like Krieger visit particular locations because of their unique attributes, but the only reason those specificities stand out is because the rest of the restaurant is exactly what you expect, including the food. She also questions if the apparent wave of homogenization is actually a modern trend — in her mind, McDonald’s were always uniform, it’s just that the older design is considered more aesthetically pleasing by those who notice these changes.

“In my view, I think it’s just another era of homogenization, it’s not newly homogenized,” she says. “Since [then-McDonald’s CEO] Ray Kroc decided on the mansard roof design back in 1968, the company has always wanted owners and operators to use their standard design. If they push people to update their restaurants to what they view as a modern standard, that’s a pretty normal business practice. I think a lot of people who don’t necessarily know how things work behind the scenes might view that as something sinister, but if I was running McDonald’s, I would do the same thing.”

When reached for comment on whether the company encouraged nonstandard McDonald’s to change their restaurants for the sake of their corporate image, McDonald’s Corporation provided the following statement:

We have so much love for these unique and creative McDonald’s locations around the world and the sense of nostalgia they bring. At the same time, we’re constantly modernizing and innovating across our restaurants through new menu items, tech and digital innovations to give our fans the best possible experience, whenever and wherever they visit. And as we have for the past 66 years, we’ll continue to work closely with designers to create environments which are on brand and uniquely McDonald’s for our fans worldwide.

Given existing trends in the industry, it seems unlikely that your local McDonald’s will bust out the yellow and red paint anytime soon. That said, even if you aren’t an abiding fan of the Big Mac — or any of the chain’s healthier fare — it’s hard to deny the company’s potent legacy as the firm that arguably created fast food in the first place. The unique and strange locations that Krieger and his fans document might soon fade into the past, but it’s likely that McDonald’s and other QSR brands will need to imagine a more sustainable future for their brands beyond copying the Chipotles and Starbucks of the world. Perhaps they could learn a thing or two from the goofy franchisees that garner thousands of likes and retweets — the overall appreciation might be ironic, but there’s a sincere curiosity underlying the laughs.