Post 154 Mortem- A Q & A with Mark Moeller, The Consultant 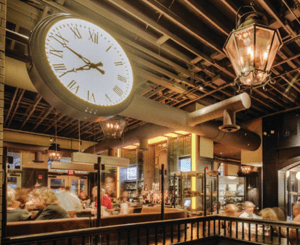 By Michael Catarevas | Mark Moeller owns The Recipe of Success, a restaurant and food service consulting company. He has been involved with the opening of hundreds of restaurants. He was hired to oversee Post 154, though final decisions were made by chef Alex Rosado and the various managers. Moeller was there for the first 10 months.

What was your mindset when Post 154 opened?
There were a lot of operational issues, from the people they hired to not following the systems and procedures we gave them, meaning my company. The only thing I can do is give advice, my knowledge and experience. The owner and management have to want to change, have to want to listen to it.

What was the biggest problem?
No. 1 was staff . They should have done a much better job hiring the right people, from servers to bartenders to managers. The initial crew [which was hired by the managers; Moeller took over shortly after that] wasn’t right for that type of operation. We needed people who had years of experience, who could hit the ground running. There were also too many cooks in the kitchen, so to speak, who decided they had the ability to make decisions. Nothing was cohesive, which happens a lot in restaurants. Ego gets in the way.

Did you talk to the chef about it?
Absolutely. But he was so overwhelmed, he just said this is what we got. I would have hired servers, especially, with better experience.

How did it manifest itself?
We had guests who waited hours for a table. That’s good and bad. When they finally got their meal, if one small thing was wrong, it became big. Something like an empty martini glass left on the table when the new one was served. People who understand fine-dining service, that’s not acceptable to them.

Why was the chef in charge of everything?
The owner hired Alex to run it. They knew each other from Florida. A lot of chefs are in charge of the whole operation. But Post 154 was unique because of its size. Alex wasn’t tuned in to the Westport crowd. He didn’t know this area. He was from Florida, and knew resorts. From my perspective, I would put a chef in charge of the menu and kitchen, but not in charge of the entire operation. And the reason is that I’m a restaurateur and know how to run a restaurant better than the chef will. Alex shouldn’t have had to worry about every detail, but since he was in charge, that came first and being chef came second. So his primary responsibility was the overall restaurant. But there were too many moving parts, especially in a place that big.

Did he agree with the things you said needed to change?
Some things. And others he didn’t. We’d have arguments, but at the end of the day we came to an understanding.

Why was the menu changed so often?
Right before I left, we changed it to have more of a steakhouse feel. Which is what the building looked like, a steakhouse. Then after I left they changed it three more times in six months. Alex ended up not being who he was, which is a very talented chef who understands flavor. So what happened was people didn’t know what to expect. They’d ask what happened to this dish or that dish that they liked. That’s a sure way to kill a business.

The chef’s original menu was Latin-oriented. Should it have been more mainstream for the Westport market?
No. Most every restaurant around here is main-stream. You’ve gotta be different. Same old same old is boring. Why are people going to come to you, a restaurant that’s expensive, instead of some place in Fairfield that’s half the price?

Was it wrong to have Post 154 be a fine-dining restaurant?
It wasn’t wrong if that’s what they wanted it to be. But then they should have lived up to that standard. It was supposed to be a fine-dining experience in a casual environment.

Was it a mistake to have runners bring food to guests instead of servers?
No. For that size restaurant, runners (staffers who don’t take the orders but deliver the food) were the best thing. But the servers and runners should have been better at knowing seat numbers.

Was not taking reservations a mistake?
It was my decision, and I stand by it. The reason is that if you make a reservation for a table of two at 7:30 p.m., which is prime dinner time, I can’t sit that table for two hours before that reservation is scheduled to come in. Because if I do, I risk those first people not being done with their meal, and making the people who come at 7:30 for their reservation angry that their table is not ready.

Also, it’s a brand-new restaurant, a hot spot. Why am I going to leave it half empty for half the night? I need to turn those tables because of the rent and many other things. It was 130 seats in the dining rooms. If everybody makes reservations at 7:30, it’s empty until 7:30. Restaurants have to turn their tables at least twice on Thursdays, Fridays and Saturdays in order to make the money they must.

But what about all the people who came in and were told they had to wait an hour or more? They weren’t happy about that.We would tell people who called for reservations that we didn’t take them, but if they got here at 6, 6:30 latest, they had a very good chance of getting seated right away. And there were different demographics. We would get families at 5, 5:30, who were gone by 7, 7:30. Then get the 35-55 couple crowd that were four tops (four people) for dinner, then after that get the younger crowd for nightcaps, appetizers, bar activity and music. So I could conceivably turn tables two or three times without even trying.

Was Post 154 just too big?
Yes and no. Yes because you have 150 seats [in the main dining room], including the bar. So if you have 100 people in the restaurant, most places would kill to have 100 people there. But we were one-third empty on weeknights. So if you walked in, especially if you were a millennial, you wanted to be where it’s hot, where it’s popping. A lot of them are not going to stay, even if the food is good, if it’s one-third empty.

What about social media and marketing?
They needed to do it much better. There was really no marketing going on for Post 154. For a restaurant that size, it should have been on the radio, billboards, more social media, more public relations, that kind of stuff . They thought if they build it people will come. It doesn’t work that way, not anymore. Maybe years ago it did, in smaller towns, but now it doesn’t. They had someone doing publicity on a small contract, but it wasn’t the right contract for that restaurant.

Why after the first year did the owner make a management change?
Because the operation wasn’t where it was supposed to be financially. The total picture wasn’t where it needed to be. So he brought in a group that had four other restaurants. They had experienced employees they could use at Post 154.

Should Post 154 have made it?
Without a doubt. But it needed much better consistency and marketing. I would have had it open Wednesday through Sunday, not seven days a week, so demand would have been bigger. And we would have had the opportunity to make people happier for all the right reasons.