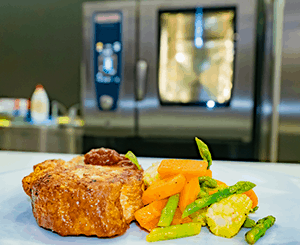 Imagine a ghost kitchen hub of 16 independent operators, each with their own menus, working from separate kitchens under one roof. A family calls in a single order for dishes from several of the operations. Each outfit prepares its dish, places it on a conveyor belt that runs down the center of the facility, and — despite the varying cook times — all arrive at the end of the belt at the same time, ready for bundling and delivery.

This would have been impossible a few years ago, but it’s the reality for Crave Hospitality Group’s Boise, Idaho-based Crave Collective, largely because of its smart backend management program.

And it sounds high-tech, but you don’t have to be a “techie” to grasp the value of advanced back-of-house equipment and software automation technology: They can make operations faster and smarter. Plus, many of these new systems offer improved accuracy and consistency with an added layer of monitoring, adjustment and general oversight.

KITCHEN UPGRADES
BOH automation options are endless. But if you could invest in only one automation upgrade, Jay Bandy — president of Goliath Consulting Group, Atlanta — suggests purchasing a system that ties in food preparation projections with labeling and food safety. “There are several systems out there that incorporate these three components,” he says.

A good system indicates how much of any item to prep based on expected volume and product mix. After the food is prepped, the same system can print labels indicating who prepped it and when, as well as the expected shelf life. Labeling automation ensures the label is legible and eliminates human miscalculations, enhancing food safety. This type of platform sometimes includes Bluetooth cooler and freezer monitoring, reporting, and alerting, which also remove human error and boost food safety.

“QSRs have been using this technology for some time; now it’s starting to become available to independent operators,” Bandy says. “That’s where tech has gone in 10 years — from the big guys to the smaller guys.”

For their flexibility as well as their monitoring and one-touch cooking capabilities, combi ovens are the BOH automation upgrade Mark Moeller suggests. He is owner of The Recipe of Success, a national food and restaurant consultancy based in Westport, Connecticut. With one type of combi, “you can put multiple items in the chamber at the same time, and when you open and close the door, it adjusts the cook time and temperature,” he says. Each shelf operates with its own temperature and humidity controls, allowing any number and variations of items to cook at the same time, saving time while eliminating the need for other equipment.

One of Moeller’s clients, Super Sandwich in Shelton, Connecticut, opened 10 years ago with fryers, a flat-top grill, a two-burner stove, a charbroiler and a convection oven. Since it added two combi ovens, the sandwich, soup and salad concept has eliminated the convection oven, flat-top grill and charbroiler. Because of the oven’s temperature flexibility, the combi oven does everything — it can make grilled chicken, hardboiled eggs and cookies as well as toast sandwiches and make soup stocks. “And they are looking to add ribs and pizza to the menu,” he says. The oven has allowed about a one-third reduction in kitchen labor, freeing up existing staff to handle other tasks.

AI AND MACHINE LEARNING
Artificial intelligence (AI) will take fryer and grill automation a long way. For example, Bandy points out a falafel-making machine may have output capacity for 300 pieces an hour, but if outfitted with AI capabilities, it can adjust output based on customer counts and orders coming in, and thus only make the actual number needed.

AI and machine learning, another form of robotic processing, which allows AI systems to continuously “learn” without being explicitly programmed, are largely behind the automation system used at Crave Collective’s ghost kitchen operation. Co-founder and CEO Devin Wade and his team developed a proprietary software platform to run and collate BOH operations for each of the 16 concepts housed in separate kitchen suites within the 15,000-square-foot facility.

Each kitchen runs off a kitchen display system or screen that, for starters, forecasts supply and volume needs based on orders, Wade says. While the system is capable of outputting a whole set of analytics to help managers, what makes the platform unique during service is how the current work order flow ties in with the other restaurant units.

Cook times for each menu item for each unit are input into the system. Likely time-fluctuation factors are taken into account based on such variables as daypart, order velocity or day of the week, for example. The system adjusts the expected cook time accordingly. When a customer orders items from various menus, the system computes cook times for each item and projects when the complete order will be ready for delivery or pickup.

At the kitchen level, workers see the order on the screen, but don’t start the preparation until a green button lights up. They push the button as they begin the prep, then push the “complete” button when the item is done, thus allowing the machine to keep track of actual cook times. The software metes out the start times for each ordered item from each restaurant operation based on cook times in concert with other ticket items ordered.

The first Crave Collective opened in Boise in October 2020, with 11 more planned to open this year. “All our expectations have exceeded our goals for attracting higher ticket averages and order frequency,” Wade says.

Smart kitchen management software will be a pillar of the automated kitchen of the future. “You want it to track as much data as possible [to] compile sales data, track inventory, store recipes and schedule labor, for example,” says Chef Kevin Villanueva, R&D chef for San Francisco-based consultancy The Culinary Edge and the firm’s quick-serve concept, Starbird Chicken. The software he works with performs all of these tasks, and also helps track ingredient costs per dish. It also evaluates anomalies if the dishes fail to match the expected cost, tracking down culprit issues, which may be tied to inventory tracking, mix analysis and more.

Chef Villanueva admits that much of the current restaurant automation is focused on front-of-house, “but for BOH, software is getting better and better,” he says, especially for online training programs that help cooks learn faster and more efficiently, without language barriers.

In the end, Crave Collective’s Wade says their BOH automation isn’t designed to replace kitchen workers, but instead to make workers more efficient through space layout and organization combined with software, in a way that hasn’t been done before. Investing in these systems can not only reduce inefficiencies; it also can lower costs over the long term.