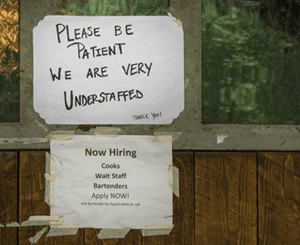 GREENWICH — It’s been a disruptive time for restaurants and other small businesses in Greenwich and around the region.

Some normalcy returned earlier this year as the COVID-19 crisis slowed. But now small businesses are facing other big challenges due to labor shortages, supply chain disruptions and higher prices for basic commodities. Diners are likely to see higher prices when they eat at restaurants, and some menu items will be unavailable for the foreseeable future. A recent survey taken of restaurants in Connecticut shows a dramatic rise in operating costs, with lower profit margins.

Labor shortages have become a significant problem, restaurant managers say. The shortage is often attributed to benefits that workers have accumulated during the pandemic, though experts say the situation is more complicated.

A shift in attitudes toward the typically demanding work and long hours that restaurants entail is also cited, and surveys have shown that many restaurant workers have transitioned into other sectors of the economy or different areas of the hospitality field. “People have left the industry,” said Mark Moeller, a restaurant consultant in southern Connecticut.

Doug Grabe, who operates the Little Pub in Cos Cob, as well as four other Little Pub locations, said, “Labor is always an issue, and we’ve got to figure out how to make the work attractive. Some positions will not come back, and that’s OK.”

“During COVID we heard that many restaurant workers left to relocate in less expensive areas of the state, or simply changed to higher paying jobs,” said Marcia O’Kane, president of the Greenwich Chamber of Commerce.

“It’s been said that the restaurant industry’s lack of health insurance became a factor for some. For others who were laid off, they simply didn’t come back and took advantage of the unemployment insurance that was extensively being offered,” she said. “It’s possible that if higher wages and attractive benefits could be offered to restaurant employees that workers might come back — but at a higher cost to the consumer.”

On Greenwich Avenue, an Asian-style steakhouse has posted not just one but two signs seeking help. At Putnam Restaurant, owner Nick Nikas says the business has been especially challenging in recent weeks, though he has seen few staffing problems with his longtime employees.

“They’ve been here many years, and they’re loyal,” he said. “But help is challenging. I’ve heard of friends who have to close restaurants because they can’t get help. Talking with people in the business, they’re finding it very difficult to get help, even paying more.”

Help wanted
Labor shortages have also been felt in other industries. At the Sam Bridge Nursery on North Street, staffing has been a continual problem, said manager Maggie Bridge, manager of sales and marketing.

“Right now we need to make hires in every department: retail, production and landscaping. We have had ads running for ages. We offer competitive wages, benefits, a great place to work and more. We get an incredible number of applicants — and only a few people are actually willing to come in for an interview,” she said.

Another major problem for restaurants and other businesses has been supply-chain shortages. “It’s a nightmare,” said Nikas. “Supplies are hard, and some you can’t even get. And everything we have in the restaurant – soda, steak, eggs — the prices have gone through the roof.”

Grabe, owner of the Little Pub, said some menu items have been removed because of shortages and higher costs. “For example, lobster has been off the menu all summer, and lump crab meat became an issue in July, so we took crab cakes off the menu,” he said. “But there’s a silver lining in that it’s given us the opportunity to stretch our legs creatively and use ingredients we might not have thought of.

“Necessity is the mother of invention and we find ourselves inventing a lot these days,” Grabe said. Even basics such as napkins have been hard to come by, he said, due to shipping problems and port access on the West Coast.

“We’re in constant communication with our vendors to forecast our needs, and when we come across a supply of something we know we will need, to-go containers or napkins, we are buying a month ahead of demand to mitigate the risk of not having any. So storage space is at a premium,” Grabe said. “Meanwhile, most of what we need is sitting in a container ship a mile off the port of Long Beach, (California), waiting to be unloaded and moved to the East Coast. It’s bizarre. … It’s a juggling act.”

At the Elm Street Oyster House, manager Anthony Salvatore said the operation was short-staffed earlier in the year. “At the beginning, it was tough, a lot of people were working double shifts,” he said, but the restaurant is now fully staffed. “People have been here for years,” he said, and that sense of mutual loyalty was an important factor in maintaining staff.

“But things are tight,” he said, and ordering has become a major challenge. Even the small notepads that waiters use to take orders have become hard to come by, Salvatore said. Gesturing to the bar, he added, “Tequila — very difficult to get.”

Survey results
Scott Dolch, executive director of the Connecticut Restaurant Association, released the results of a survey of restaurant operators earlier this month. The survey showed 90 percent of operators are paying more for food, and 79 percent of restaurants are reporting higher labor costs. Nearly every business, 91 percent, said smaller profit margins were the result.

“This new data shines a light on how the pandemic has placed a heavy burden on restaurant owners and their staff; from food costs to hiring new employees, local restaurants are struggling to make ends meet,” he said in a recent statement about the survey.

Moeller, the restaurant consultant who owns the Recipe of Success in Westport, says diners are accepting the higher prices. “We’re all paying higher prices when we go out to eat, but we’re OK with that, because we know the restaurants are struggling,” he said. In the longer term, he says, restaurants in Connecticut and elsewhere will have to adapt to a permanently smaller staffs.

He thinks technology — such as scanning a menu and ordering on a phone — will become a standard feature at fast-casual restaurants. “Technology will be a big one, to weather the storm and maybe come out on the other side on a positive note. And streamlining the operations will be a big one. Operate on less tables and less seats. And save money on labor, you don’t need an extra busboy or server or two. And streamline the menu, increase the efficiency, keep all the ingredients together, to make things easier (to prepare),” he said.

Moeller says restaurants fulfill a basic need, and said they would adapt to meet the challenges of the times. “Restaurants are part of the fabric of our being, part of our everyday life,” he said. “People love to go out. That’s not going to change.”

NRN: Why training is a critical piece to the labor puzzle