CT Insider: Greenwich Avenue may see its biggest restaurant yet. How does the existing food scene compare? 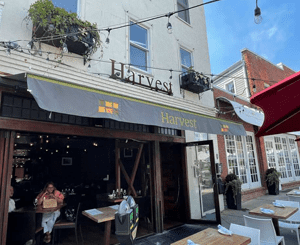 Robert Marchant | In the world of Greenwich Avenue dining, a new king of the hill could be on the way. Following approvals by town officials, Kyma, a restaurant featuring Greek cuisine, is poised to offer 200 seats for dinner on weekdays. That would make it the largest dining establishment along the Avenue, in the configuration authorized recently by the Planning & Zoning Commission.

The location of the proposed restaurant — at the upper section of the Avenue, where big restaurants are not the norm — and the overall growth of food-service operations are changing the face of the central business district. But the shift toward dining establishments with large numbers of seats is also raising concerns about parking and whether big restaurants offer too much of a good thing.

More restaurants have been coming to Greenwich Avenue in recent months, a trend that has followed in the wake of an overall decline in the retail sector.

A restaurant expert, Mark Moeller, said towns such as Greenwich are following a larger pattern.

“Landlords are recognizing that retail, in general, is dying out. There are more spaces … even in traditionally retail heavy locations” said Moeller, a Westport-based consultant, “Retailers are realizing that they do not need a location in every town, and shoppers will travel a little farther if they need to try something on or feel the material.”

The largest restaurant in operation on Greenwich Avenue, in terms of seating — the yardstick used by the town’s Planning Department — is Duoro, with 113 interior seats and six outside for a total of 119.

According to the Planning Department, which is compiling data for an overhaul of the town’s dining codes and outdoor dining regulations, Mediterraneo is another large operation , with 94 seats, 79 inside and 15 outside.

Terra Ristorante also has 94 seats, 60 inside and 34 outside. East End is the next biggest, with 82 seats indoors and eight outdoors, for a total of 90. Harvest has 86 seats, 82 inside and four outside. The Gingerman is another large restaurant, but the Planning Department did not include it in its recent survey.

The Planning Department uses seating as the metric to determine restaurant size, since it correlates with parking.

Town leaders are taking a closer look at dining establishments due to the demand for outdoor dining during the COVID-19 pandemic and as part of an overall refurbishment of the business district.

Planning Director Katie DeLuca said the town had eased back on zoning restrictions to allow for more dining .

“To have a vibrant downtown, you need to have a mix of uses,” she said.

“Several years ago, we removed the distance requirement between restaurants with liquor licenses, understanding that it would lead to more restaurant uses, and a more vibrant downtown,” she said in an email.

“In 2021, we further relaxed regulations allowing for second floor restaurant space as long as it was part of the first floor restaurant,” she said. “Retail establishments, restaurants, residences and small office space are all equally important within the downtown.”

Park and dine
The Planning Department has recently been seeking input from the public on outdoor dining downtown, parking and the retail climate along Greenwich Avenue.

Marcia O’Kane, president and executive director of the Greenwich Chamber of Commerce, said the success of the dining scene is beneficial to the community.

“There definitely has been a preponderance of new restaurant openings over the last year. The Cos Cob area can now be described as a true restaurant scene,” she said.

“There has always been a natural rate of attrition with restaurants, and the most popular and well-run ones will survive. The Planning & Zoning Commission is well aware of parking challenges in town, and we are confident that they will figure out the viability of the proposed 200-seat restaurant,” she said.

First Selectman Fred Camillo said he supports the restaurant sector and is happy to see a thriving dining scene.

“The restaurants are a source of strength on the Avenue. It’s brought a new dimension to Greenwich Avenue,” he said.

But Camillo said the town administration is working on managing the parking shortage, “Parking has always been an issue, so we’re continuing to work on that.” But overall, he said, “That’s a great problem to have.”

A lifelong Greenwich resident, Camillo said he could recall when diners lined the Avenue, with hundreds of patrons, so large-scale eateries are hardly a recent phenomenon.

But some have questioned how the large proposed Greek restaurant might impact an already scarce supply of parking. Landlords and merchants have been raising concerns during the lengthy review process for the former New York Athletic Club site.

“We continue to be very concerned about the seating capacity given the size of the proposed project and the complete lack of available parking spaces in the adjacent municipal lot,” said Claudia Leitenberger, who owns property downtown, about the restaurant application under review by Planning & Zoning.

Kosta Gianopoulos, the Greenwich restaurateur behind the proposal, notes that a restaurant with a capacity for 200 seats never reaches that number. “With 200 seats, you never fill 200 seats. There’s never every seat filled. It’s usually 20 to 25 percent less,” he said. Also, a table set for four often only has three eating at it, he said, for example.

The Kyma operation, which has locations in New York, is looking to spend over $6 million to refurbish the site, Gianopoulos said.

Bigger and better
Restaurants got bigger beginning in the 1990s. In Greenwich, a good economy and an influx of office workers in town helped usher in larger eating establishments.

The bigger dining establishments led the Greenwich town administration to craft new regulations to combat noise and overly intrusive operations. A prohibition on second-floor dining, as well as rooftop dining, was enacted over 20 years ago.

Moeller, the restaurant consultant, noted that big restaurants have always been around, though restaurants did get super-sized during the 1990s — a period when a flourishing economy, the development of cable shows built around food and the rise celebrity chefs remade the industry.

While it might seem that larger restaurants would make more money, that’s not always the case, he said, and the economics are a bit more complicated.

“Larger restaurants aren’t necessarily more profitable than their smaller counterparts, a lot depends on the cuisine, the food-to-alcohol ratio, and location. … Revenue can be tremendous, but if systems and structure aren’t in place, it will be felt on the bottom line,” Moeller said.

A problem for large restaurants, he said, is the “half-full effect,” in which a perception sets in at a large restaurant that doesn’t appear full, that it is not a popular place.

Planning and zoning commissioners have also been concerned about too many dining patrons overwhelming the commercial corridor and unintended consequences — even citing the old Yogi Berra quip, “Nobody goes there anymore. It’s too crowded.”

Town officials and planning experts will continue deliberations over what may turn into the biggest restaurant on the Avenue, and the overall dining scene downtown, in the weeks and months to come.