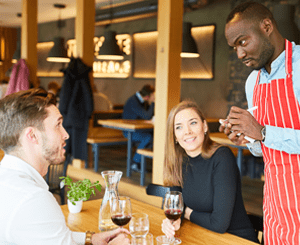 By Marcy Kreiter | Recently released October statistics from Indeed Hiring Lab indicated fewer people are looking for jobs in the hospitality-tourism sector – nearly 24% fewer than in February 2020 when the pandemic first took hold.

Even with restaurants promising higher wages and more benefits, the number of searches fell nearly 10% from September to October. Drilling down to food preparation and service, interest was off 18.3% compared to February 2020 and nearly 5% from September.

Even among those without jobs, active overall job searches fell nearly 4 points from September to October as people reassessed priorities and decided to move to other industries.

Here’s a look at the factors at play … as well as a few possible solutions for the food industry:

The restaurant industry has developed a reputation for employing people just part-time to avoid paying overtime and bestowing benefits, and for erratic schedules. Though such jobs traditionally have been a starting point for many, the pandemic has highlighted online options that often pay more with less exposure to the public.

So, the question is: What can the food service and preparation industries do to attract new workers and ease the crunch?

“A lot of organizations have been focused simply on the monetary aspect of their wellbeing: Are we paying them enough? Do we need to give them better benefits?” Claire Brummell, a human resources consultant with The Universal Needs, told The Food Institute.

“But if you want to lure people back to an industry that they have chosen to walk away from, you need to look at all aspects of their needs.” This includes safe working conditions, training, opportunities for growth and a way for them to feel they have some control over their lives.

PeopleFinderFree co-founder Eden Cheng said the one thing employees value more than higher pay and improved benefits is the chance for career development, something that is especially important to low-wage workers.

“They want to be confident that there is a chance that they can grow their skillset and climb up quickly, whether it be through on-the-job mentoring or training initiatives,” Cheng said.

Restaurant consultant Mark Moeller suggested part of the problem lies in the way jobs are advertised, saying ads should be written to make sure the right people are being targeted.

“Do you really need a line cook? Or is it really a short order cook for breakfast? Small changes in language can make a difference,” he said.

Chad MacDonald, a 20-year veteran of the restaurant industry said it’s no wonder interest in low-paying food industry jobs has tanked considering the behavior of some customers.

“While a rude or demanding guest wasn’t rare before, since the pandemic, the number of people who feel entitled to harass and attack restaurant and retail workers has increased exponentially,” MacDonald said. “The sheer amount of vitriol directed at service workers these days is off the charts.”

In addition to reassessing their priorities, hospitality workers may have been scared off by the realization their industry could be shut down arbitrarily by the government, said John Frigo, ecommerce manager for Bestpricenutrition.com.

“I think a lot of people are going to move to jobs that may not pay much more but are better work environments, e.g, someone who worked in food service maybe goes to get a job working in a call center for the same money but at least they have a 9-5 schedule, don’t work holidays, and will get a steady 40 hours per week,” Frigo said.

If there simply aren’t enough workers available, reducing the number of outlets may be necessary for some restaurateurs, said Andrew Fiebert, founder and CEO of Lasso.

But here’s another option:

“I talk to pizza operators from all over the country. The solution is this – smaller restaurant footprints, tighter menus and larger delivery areas,” said Eric Baum, vice president of sales and marketing for Perfect Crust Pizza Liners.

“The employees are not coming back, and restaurants need to adapt,” he added. “Consumers, due to COVID, have changed the way they dine, and restaurateurs haven’t quite adapted yet.”

READ AT THE FOOD INSTITUTE