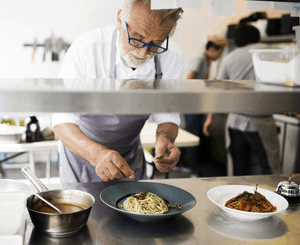 By Amelia Levin | For a moment, the future of expe­diting stations looked bleak. With the pandemic causing indoor dining closures and reduced dining room capacity nationwide, some operators and designers were left wondering if the traditional kitchen pass-through would suddenly turn into nothing more than a holding and filling station for takeout containers and to-go bags.

That doesn’t seem to be the case anymore now, as more dining rooms reopen. Still, last year’s extra down­time allowed both operators and foodservice designers to rethink one of the most important kitchen areas in both full-service and limited-service restaurants spanning all menu styles.

“We spent all of 2020 working backward and looking at where our deficiencies were to redesign our kitchen from a labor perspective instead of adopting the idea that we would do takeout forever or cater to third-party delivery services,” says Michael Beltran, chef/owner of three concepts in the Miami area. Beltran’s restaurant concepts include Ariete, a high-end restaurant; its next-door sibling Nave, a new American concept focused on seafood and house-made pasta; and Chug’s, a chef-driven, fast-casual Cuban concept. “The expo station can’t just be a place where we call tickets and add a garnish, it needs to be a functional part of the overall kitchen,” he says.

While Ariete reopened for dining in the summer of 2020 and Nave last December, at press time Chug’s remained closed and was undergoing a complete redesign and renovation. During the closures, Beltran took the time to rethink the pass at Ariete, which sits within arm’s reach of the charcuterie, garde manger and pastry stations. This strategic placement allows whoever is expediting plates to also plate raw bar items and desserts as well as finish other dishes. “The expo station now can save you money from a labor perspective because you’ve created a revenue center of something that before was kind of a limited space,” he says.

Indeed, Stuart Davis, vice president, Midwest Division, at Next Step Design, who spent years working on the operator side as a chef himself, doesn’t think expediting stations of the future will change that dramatically. Nor will they continue to serve as a rest stop for to-go packaging. “Rather, it’s all about designing these stations so they function well in the space, but do not obstruct sightlines into the kitchen,” he says. “You certainly don’t want to see a bunch of smiley face to-go bags sitting on the counter.”

When it comes to sizing, some designers see the potential for expanded stations in the future, at least in length. This might help accommodate not just somee extra to-go packaging but also individually wrapped condiment ramekins, plates, extra silverware and other items required for safer dining.

“I wouldn’t be surprised to see expediting stations increase in size by at least 25%,” says Mark Moeller, restaurant consultant and founder of the Recipe of Success. “We used to design consolidating stations at about 5 or 6 feet in length, but now I’m looking at closer to 8 feet with at least a double shelf over the top or underneath to hold everything. Post-pandemic, takeout will still be a big part of opera­tions, but it may not be at the level it is today.” Still, that’s an extra few feet of space operations will need, whether on the expo line or nearby.

To correctly right-size an expediting station, first look at the intricacies of the operation, advises Moeller, who works with fast-casual as well as high-­end, full-service restaurants. “Do they want to do preordering, app orders, on-site ordering, website orders and curbside pickup? Do I have room for all of the packaging, condiments and utensils? Do we now need a drink refrigerator nearby to hold drinks for to-go orders? It’s these types of things we have to consider from both an efficiency and safety perspective.”

While expo station length might grow in the future, the width should not, according to Davis. “You want enough space for the plates to be set up but no more than 3 feet, so you don’t have people reaching over to garnish them. I’ve also seen a trend of raising the height of the counter from the typical 36 inches to 38 inches, so chefs are not hunched over when they finish and wipe down plates,” he says. “Ergonomics are definitely being con­sidered more than in the past.”

When it comes to the expo station’s base, Davis considers sight lines here as well, always looking to have the struc­ture flush with the floor with a toe kick to hide cords, wires and the like.

Traditionally, expediting stations sit between the hot line and more toward the dining room. But in open kitchens, or in kitchens with counter seating or a chef’s table nearby, designers need to take into account other considerations when it comes to positioning the station.

For any future restaurants, Beltran says he will design the pass more like a double-sided island, with one side fac­ing the hot line and the other facing another counter where food runners can collect orders without creating too much traffic in and out of the kitchen. “The runners never set foot in the kitchen this way,” he says. As men­tioned earlier, the pass-through will sit near other stations for maximum labor efficiencies. “The chef can handle hot food coming out, but also help with to-go orders and charcuterie prep when not as busy.”

At Chug’s, Beltran built a new, street-facing coffee and pastry takeout window near the expo station so con­solidators can easily Rip from indoor dining orders to helping process that part of the business, as well as orders going outside of the four walls. A pizza prep table with cold platters for chicken salad, egg salad, cold sand­wiches, pastry and soups is positioned nearby for easy access. “This way, the pass becomes a three-part revenue center,” Beltran says.

Having the right amount of plate­heating capability is important when designing expediting stations, says Davis, but this doesn’t have to take shape as simply a row of heat lamps.

With his more recent projects, Davis has focused on curating zones with integral heating for the counter­tops, whether that’s through electricity or hot water pumps to take the chill off the plates while leaving other parts untouched to accommodate cold dishes. To warm part of a soapstone countertop at a bed-and-breakfast in Wyoming, Davis tapped into the facility’s geother­mal heating unit, which provided a more sustainable power source.

In general, Davis says, “[projects) seem to be moving away from heat lamps; chefs these days don’t want their food to wait, they want it run to the table as soon as it’s plated.” While heat lamps still have their place, and especially if designed with aesthetics in mind, they can create an obstruction into the kitchen or shine too brightly in guests’ eyes if they are seated nearby, he feels. It’s just another consideration to take when designing the heating element of an expediting station.

Davis always makes sure to design expediting stations with convenience outlets for plugging in small appliances like induction burners or mixers. “Passes are often used during the day, and the prep chef might work there to do pasta rolling or pastry because they are often made of marble or wood,” he says. “Some also use the space to do demos. I Like to think of that area like a home kitchen island – you have ample workspace, power, a place for trash, maybe some undercounter, hot-holding or heated cabinets for plate warming or a built-in, flush-mounted cold rail to keep garnishes cold, but I typically don’t put in sinks because I don’t want water splashing anywhere near the guests.”

And then, of course, there’s tl1e question about where to put the printer and the tickets. “No one wants to see a ticket rail with ‘chits’ hanging down, blocking views, but you still need them. Even with all the new digital technol­ogy, I still see restaurants using the paper ticket method to consolidate orders,” says Davis, who often builds in space flush with the countertop to plug in the printer and drop down all the wiring as well as space for tickers to sit out of view of guests. “As design­ers, we always want to design beautiful kitchens, but it’s easy to forget about tl1e printer and ticket problem. A lot of times, the pass is the closest thing to the guest where the food is being picked up, so you need to keep that area clear. If you have guests sitting right next to or at the pass, even more reason not to have the space cluttered with tickets.”

From the extra condiment ramekins and utensils to the plate wipes, small gar­bage can and – you guessed it  – any increase in to-go packaging, expediting stations of the future will need ample if not more shelving and organizational capability than ever before.

“We even like to build in a cutout in the countertop to drop down sharpie pens, tickets and other clutter out of the way,” says Davis, who also makes room for backup printer roll paper and a small bus tub for dishes mat have come back to the kitchen for one reason or another.

For fast-casual operators, Moeller has sought to allow a little more space for to-go needs going beyond just the containers and bags to include space for labels, markers and staplers to close up bags for pickup. He also makes room for a sanitation bucket with ample tow­els as well as doilies, ketchup packets and more. “Any way you can organize everything, through shelving, under­counter refrigeration and other storage tools -while keeping it all out of sight of the guest – is key,” he says.

While expediting stations might continue to look like to-go packaging stations for a little while longer, opera­tors and designers are starting to dial back to pre-pandemic considerations. However, the shift this central kitchen station has taken in the last year was not a wasted exercise. “It’s all about how we, as operators, can become more efficient, while still executing excellent food,” Beltran says.

QSR: 15 Ways Fast Casual Will Change in a Post-COVID World