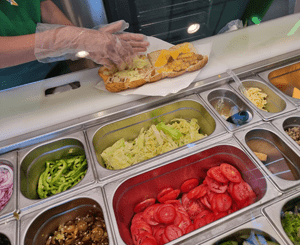 Paul Schott | Subway has announced plans to hire more than 50,000 people this month to work in its restaurants across the U.S., as the fast-food giant gears up for what it describes as its “biggest summer yet.”

“The effort continues the momentum kicked off by last year’s Eat Fresh Refresh, marking the largest menu update in the brand’s history,” Subway said in a statement this week, in response to a Hearst Connecticut Media inquiry that sought more information about the hiring campaign. “The launch led to Subway’s strongest sales since 2013 and a record-setting year for the brand. This year, the journey continues with second phase of our refresh coming this summer, introducing even more new, craveable menu items for guests to enjoy.”

New recruits would join a company that has more than 37,000 restaurants across more than 100 countries. In response to Hearst’s inquiry, the company declined to disclose its current number of employees or specify the amount of its sales.

The statement did not provide hiring projections at a state level, noting that “since Subway restaurants are independently owned and operated, the number of employees and hiring needs can vary by restaurant.”

Subway’s hiring surge reflects the recovery of the food-services industry since it was hammered by COVID-19-related shutdowns during the first half of 2020. In Connecticut, accommodation and food services’ employment is projected to grow about 22 percent between the second quarter of 2021 and second quarter of 2023, according to the state Department of Labor. During that time, only arts, entertainment and recreation’s employment is projected to grow more, at nearly 30 percent.

Mark Moeller, a national restaurant consultant and owner of the Westport-based The Recipe of Success, told Hearst Connecticut Media that Subway has “done a good job on the (menu) refresh, and they are banking on increased revenues and positive guest reactions to their changes.” But he cautioned that inflation was leading to less dining out, while a potential recession would further curb demand.

“Operators should be looking at the efficiencies of their current operations and find a way to maximize the team they have with minima investment into new hires,” Moeller said. “I would argue that a better investment is into the team the restaurant already has. They are trained and most likely have capacity in their day to do more. Operators need to do a cost-benefit analysis of increasing wages for their current team versus the cost of acquisition and training of someone that is unproven.”

The hiring also indicates that Subway has not been hurt much by some social media users’ threats to boycott the company for keeping its sandwich shops open in Russia following the country’s invasion of Ukraine.

In March, Subway announced that it would not make any new direct investments or open additional restaurants in Russia. But, in contrast with other fast-food giants such as McDonald’s, Subway has not announced the closing of any of its restaurants in Russia. Instead, it has reiterated that all of its approximately 450 establishments in the country are independently owned and operated by local franchisees and managed by an independent master franchisee.

Subway has also recently faced criticism of its treatment of franchisees.

“Some franchisees … are getting restless,” comedian John Oliver said during a May 22 episode of his HBO show, “Last Week Tonight with John Oliver.” “Here in the U.S., 100 of them got together and wrote an open letter last year stating that ‘for many of us, this dream has turned into a nightmare.’”

The company responded in a statement that the show “inaccurately characterized Subway and the support we provide our franchisees.”

Bar and Restaurant: What Lessons Can Be Learned from the Recent Grubhub Promotion...
Scroll to top