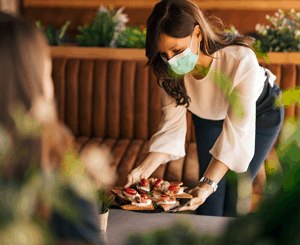 By Erin Kayata | SOUTH NORWALK — Roland Olah had one goal in mind when crafting his first restaurant Bruxelles Brasserie: He wanted diners to feel at home. Olah put an enormous amount of care into every aspect of his new restaurant, which he opened in early December. The North Main Street space, once occupied by Barcelona, is divided into three rooms. When customers enter the restaurant, they’re greeted by a bar set against a wall with arches built in, covered in white, flecking paint. It’s an architectural detail that contributes to the unique feel of the space.

To the right of the bar is a vintage, gold-framed mirror. The pink script on the glass temps diners to try a gin bowl, one of many European-inspired drinks Bruxelles serves. The wall to the left of the bar is covered in similarly aged mirrors. Wander into the next room and you’ll find black-and-white framed photos covering a red accent wall from floor to ceiling. Small tables clustered close make you feel as though you’re in a cozy bistro. Overhead, a mix of European music pipes down and serves as background to customer conversations.

But no one is getting to see the inside of Bruxelles for now and it will be a while before anyone experiences the close-knit cafe feel, considering the social distancing guidelines. In mid-March, Bruxelles, and all other Connecticut restaurants, were ordered to close their indoor dining and switch to takeout in response to the coronavirus pandemic. It was a tall order for anyone, never mind a new restaurant, which relies heavily on fresh food and its atmosphere.

“You come here and you see it’s a special spot,” Olah said. “It’s not the same (doing takeout.). … I believe a dining experience, it’s the whole picture. The food is just part of it. … We tried the best we can, but this restaurant, it’s about the atmosphere.”

Opening Bruxelles (in South Norwalk) was a dream turned reality for Olah who came to the United States from Hungary almost 11 years ago. Although he’d made a name for himself in Europe as the executive chef of the highly praised Café Erté in Budapest, Olah decided to give it up in exchange for trying his skills in America when he received a green card. He came to Fairfield and spent time working in New York City for Daniel Boulud, owner of 13 restaurants worldwide including Daniel, a Manhattan restaurant that boasts two Michelin stars.

After spending a year with Boulud, Olah became executive chef of Martel in Fairfield, a French-style bistro. Olah worked there until 2019 when he struck out on his own.

Opening a restaurant is not as risky as it seems if the owner has the background and a plan when doing so, said Mark Moeller, founder of the Westport-based national restaurant consulting firm, The Recipe of Success. But restaurants in South Norwalk face particular challenges, including a shortage of available workers and a crowd that can be hard to impress.

“We’re a very particular and educated clientele,” Moeller said. “It doesn’t matter what town we’re in. We’re consumed by food. We know good food and we know good service and we have expectations we want met.”

All of the food Olah serves, from the stocks to the duck confit, is made from scratch. It’s part of what caused the business to hit the ground running in the first few months of opening with sold-out weekend brunch reservations in the weeks prior to COVID-19 reaching Connecticut.

But by the time someone puts in a takeout order, comes to pick it up and brings it home, the food may lose some of the heat and freshness that makes it so appealing, Olah said.

“We’re not designed as a takeout business,” said Angela Grogan, who is in charge of operations for the restaurant. “We had to learn how to adapt.”

“We don’t have any choice,” Olah added. “We have to keep going.”

Olah and the restaurant staff adjusted their menus for takeout, swapping out fresh seafood for family style meals with offerings of enough salad, lamb and chicken to feed a family of four. The restaurant also used date night specials offered with a bottle of wine and customized Easter and Mother’s Day menus to keep things fresh.