The Philadelphia Inquirer: Center City is becoming a fast-food desert 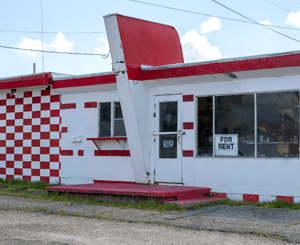 By Inga Saffron | Chew on this for a minute: Philadelphia’s downtown now has more medical marijuana dispensaries than old-school burger chains. There was a time — and, really, it wasn’t so long ago — when you could wander in any direction from City Hall and quickly find comfort in a meat-and-fries calorie bomb at a brand-name, fast-food restaurant. But since 2017, five of the six McDonald’s locations in Philadelphia’s core have turned off their griddles and shut their doors, including the popular, playground-equipped destination restaurant at Broad and Snyder. Two Wendy’s, one Checkers, and the sprawling Burger King at the busy Eighth and Market transit hub have all met the same fate.

This spring, the sun set for the last time over the golden arches of central Philadelphia’s most iconic McDonald’s, a stand-alone, Mid-century Googie palace on South Broad Street, across from the Creative and Performing Arts High School.

Within the traditional boundaries of Center City, only a single fast-food restaurant remains: the Wendy’s at 15th and Chestnut. OK, two, if you count the McDonald’s way up Broad Street at Girard. For comparison purposes, you can select a CBD-infused Lemon Meringue Kush or Appalachian Spirit tea at any of three marijuana dispensaries between City Hall and Washington Square.

Although some of the closures might be blamed on the pandemic, when indoor dining was forbidden, the pandemic alone does not explain why fast-food chains are vanishing from Philadelphia’s downtown. The appetite for Happy Meals, Whoppers and Bourbon Bacon Cheeseburgers remains as strong as ever, if not stronger, pandemic sales figures suggest.

The trouble is, the hunger for building sites in Philadelphia’s core is even greater. As land values soar, low-cost burger chains are being priced out of their downtown locations, both in Philadelphia and other high-demand American cities, said R.J. Hottovy, who tracks the food service industry for Aaron Allen & Associates. “The same thing is happening in Chicago,” he told me.

There are plenty of reasons to applaud the closures of freestanding burger restaurants, such as the now-departed Wendy’s at 11th and Walnut. Center City’s real estate has finally become too valuable to waste on one-story buildings. Wendy’s dated sun room design will be replaced with a slim, 24-story residential tower.

Although the owners of the McDonald’s site on South Broad have not disclosed their plans, it seems likely that housing will be built there, too. Same for the Checkers site at Broad and Girard, which was recently listed for sale. The disappearance of such low-rent businesses can be seen as a measure of urban health, as well as healthier eating habits.

That doesn’t mean that our hearts (at least, those that haven’t been completely stopped up by too many burgers) won’t skip a beat at their loss. Stand-alone fast-food chains, which were initially a suburban form found mainly on highways, began moving into cities in the ’70s, right about the time that people and jobs were headed out of town. Land was cheap, and there weren’t a whole lot of good lunch options for downtown workers. The burger chains not only provided affordable sustenance, they also offered entry-level jobs and easily accessible restrooms.

Like all-night diners, which have also disappeared from downtown Philadelphia in the last few years, the burger chains served as a hopeful reminder during those dark days that Center City was still kicking.

Not that there weren’t mixed feelings about the arrival of those chains. By the late ’90s, Philadelphia planning officials were warning that drive-through restaurants and drugstores were displacing urban buildings and turning Broad Street into a suburban-style highway. The Avenue of the Arts, which had been created to promote development on South Broad, even issued a strategic plan in 1999 aimed at stopping the spread of free-standing businesses. But it was only in the last decade that Philadelphia’s housing boom began driving out the drive-throughs.

The pandemic proved to be the final straw. Once people started working from home, the lunch crowds vanished from Center City’s office district. Market, Chestnut and Walnut Streets are now dotted with empty storefronts, much as they were in the ’70s. One of the last remaining McDonald’s, a hole-in-the-wall restaurant on Walnut Street, near Rittenhouse Square, was lost to fire during last spring’s unrest. Even though McDonald’s owns the land, don’t hold your breath waiting for the restaurant’s return.

Through all the turmoil of the last 15 months, residential construction hardly missed a beat. That has made the competition for prime building sites even more intense, said Leo Addimando, a cofounder of Alterra Property Group, which built the 322-unit Lincoln Square at Broad and Washington and is now filling an entire block at Broad and Spring Garden with 410 apartments. “This has been the strongest spring leasing season in 15 years,” he told me.

It’s unlikely that the displaced fast-food chains will find homes in the new apartment buildings going up in central Philadelphia. At Alterra’s Lincoln Square, the storefronts have been leased to more upscale retail tenants, including Starbucks and Chipotle, a fast-casual restaurant that is a notch up the food chain from the McDonald’s and Burger Kings. “Generally speaking,” Addimando explained, “fast-food is not a great complimentary use for high-end residential. The tenants don’t view it as an amenity.”

That explains why there is no longer a McDonald’s in the former UGI building at Broad and Arch, just steps from City Hall and the Municipal Services Building. Alterra recently transformed the early 20th-century skyscraper into apartments, called One City. Because the company saw the McDonald’s as a liability, it asked the previous owner to terminate McDonald’s lease as a condition of the sale. Alterra was more lenient when it purchased another old office building, at 15th and Chestnut, for a similar apartment conversion.

Instead of evicting the Wendy’s, which had dominated the intersection for nearly 25 years, Alterra moved the restaurant into a smaller space on Chestnut Street. The prime corner was leased to a Wells Fargo Bank.

For all the ubiquity of fast-food across America, it turns out that burger chains are not the cash cows you might expect. “Fast-food restaurants are not super profitable,” explained Darren Tristano, founder of Food Service Results, a Chicago-based consultant. Because the margins are so slim, they need cheap land and high volumes of customers to thrive.

Restaurant consultant Mark Moeller, who founded the Recipe of Success restaurant consultancy, said higher labor costs in cities, prompted by new mandates for a $15-an-hour minimum wage, have also made it harder for chains to succeed downtown.

In many downtowns, fast-casual restaurants — the Honeygrows and Sweetgreens of the world — have taken the place of the old burger chains. That partly reflects a preference for foods with less fat and fewer carbs. But those salad and noodle joints are also more profitable and can pay higher rents.

Of course, there are still plenty of places in central Philadelphia where you can get a burger and fries, but they tend to be more expensive than the old chains. “My family of four would sometimes eat at McDonald’s for $19,” Dena Driscoll, who works in communications for a nonprofit, reminisced.

Most of the fast-food chains that still exist in Philadelphia are in suburban-style shopping centers that have encroached on traditional rowhouse neighborhoods, or on big commercial strips such as Aramingo Avenue. But if housing demand keeps up, those places could be endangered, too. The freestanding McDonald’s at 40th and Walnut survives mainly because it sits at the junction of the Penn campus and several West Philadelphia neighborhoods.

It’s such people as Councilmember Kenyatta Johnson who illustrate how the market has changed. One of his fondest memories of growing up in South Philadelphia was his grandmother rounding up the neighborhood kids and taking them to Broad and Snyder for a meal at McDonald’s. He still lives close to that intersection, but now he’s a vegan. “I get my burgers at HipCityVeg,” he told me. “The chicken veggie burgers are great.”

The disappearance of fast-food chains in Center City means there are fewer places where you can sneak in undetected for a restroom break. But the restaurants, which have also long served as public gathering spots, or “third places,” are eliminating seating and restrooms even at many of their suburban locations, too, Tristano said. During the lockdown, the chains discovered that people were happy to pick up their orders at the drive-through window or have their meals delivered by such services as Uber Eats and DoorDash.

Even Starbucks, which made its name offering cozy living room seating, is now going to a takeout model. Jacob Cooper, managing director of MSC, a retail broker, says he still gets calls from fast-food chains, but mainly for sites that can accommodate drive-throughs.

Cooper, like many retail brokers, is hoping that the vacancies created by the pandemic will result in lower rents and more opportunities for start-up businesses. There has always been a good deal of churn in the fast-food industry — who remembers Big Boy and Blimpie? So, while some cheap eats disappear from Center City, let’s hope others will rise to take their place.

READ AT THE PHILADELPHIA INQUIRER