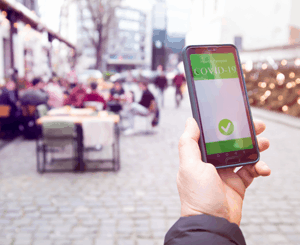 By Lisa Arnett | The concept is simple: proof of vaccination or a negative COVID-19 test on a mobile app to enter a restaurant, entertainment venue or a flight. The issues surrounding it, however, not so much. In Israel, residents are using digital health passports to show proof of vaccination so they can get into gyms, restaurants, theaters and other public places.

“Necessity is the mother of invention,” says Asher Rubinstein, a partner at New York City law firm Gallet Dreyer & Berkey who represents numerous restaurants. “So the concept of showing proof that you’re not ill or that you’ve been vaccinated, it’s understandable as we come out of this pandemic.”

Numerous digital health pass platforms are in the works or already available. Secure identity company, Clear created a mobile app called Health Pass that links verified identity with health records, such as COVID-19 test results and symptom screening surveys. Last October, Clear announced a number of partners that would be using it to monitor staff, including Chopt and Dos Toros restaurants and Union Square Hospitality Group. Other key players include IBM’s Digital Health Pass and CommonPass, backed by the World Economic Forum and The Commons Project. Similar to a mobile boarding pass, these apps display a QR code that can be scanned for touchless verification.

“It’s much like showing your driver’s license to get into a 21-and-over bar or a passport to get on an international flight,” says Keith Hontz, CEO and president of Savantis, an Exton, Pennsylvania-based SAP development and IT staffing firm working on integrating digital health passes information systems for entertainment venues, restaurants and retailers.

President Joe Biden has said there won’t be a federal vaccination passport program, leaving the matter to the state level and private businesses. New York recently announced the launch of Excelsior Pass, an app built on IBM’s Digital Health Pass, which attendees to concerts and sporting events can brandish to prove they’ve either tested negative or have been vaccinated to gain admission to venues such as Madison Square Garden. Meanwhile, governors in Texas and Florida have issued executive orders banning mandated COVID-19 vaccine passports. As states and businesses grapple with issues such as privacy, the fate of digital health passes is likely to play out in courts for months to come. “This is going to be subject, I think, to a lot of legal analysis,” Rubinstein says.

KEEPING TABS ON THE TEAM

As for how useful health passports may be for restaurants, it depends on whom you ask. They might help orchestrate health monitoring for large operations if that process has become unwieldy – but may not be as relevant for smaller operations. “We’ve had really good success, all things considered, just with monitoring the health of our staff and promoting the idea to stay home if you don’t feel well,” says David Spatafore, principal of Blue Bridge Hospitality, which operates Stake Chophouse & Bar, Little Frenchie and other restaurants in Coronado, California. “It hasn’t been something we’ve struggled to manage. Maybe that’s because of the individual size of our restaurants; we might have 40 to 50 staff members (at each). If you had 300, it would be easier to use an app.”

Union Square Hospitality Group uses Health Pass to implement daily health checks. “Before each shift, our team members complete a real-time health survey via Clear’s Health Pass app,” USHG’s safety pledge reads. “Upon arrival, their temperature is taken via a touchless Clear pod or a thermometer onsite. With this partnership, we can ensure all employees are fulfilling our daily health checks while protecting team members’ privacy.” Validating a COVID-19 vaccination is upcoming, but Clear has not yet announced a date.

NOT WORTH THE TROUBLE?

Some restaurateurs say they don’t want to risk alienating either staff or diners by requiring proof of vaccination. “I have heard of this technology and, to me, it seems more applicable to the airline industry rather than the restaurant industry, as we want to respect the privacy of both our employees and clients,” says Stephen Stoll, COO of Restaurants for Maverick Hotels & Restaurants in Chicago.

Mark Moeller, a restaurant consultant with Westport, Connecticut-based firm The Recipe of Success, thinks checking digital health passes would be too time-consuming for front of the house staff.

“To have restaurants go through the process of verifying every guest would be cumbersome, even on the slowest of evenings,” he says. “It would require dedicated staff and could create frustration for customers who had to wait in line.”

Others imagine that health passes could be a source of conflict with customers. “I mean, I’ll tell you, it’s been so hard just to get the mask mandate enforced,” Spatafore says. “The idea of having to check someone’s vaccine record – I can only imagine the fights we would have at the door.”

“To have restaurants go through the process of verifying every guest would be cumbersome, even on the slowest of evenings.” says Mark Moeller, a restaurant consultant with Westport, Connecticut-based firm The Recipe of Success

THE PERCEPTION OF SAFETY

Requiring diners to show proof of a negative test or vaccination makes sense in some scenarios, operators say. “The only true value-add may be in events where large numbers of people will come together, as they will be interacting with more than just their party,” Moeller says. “If there was the ability to utilize the viewing or logging of the data for contact tracing purposes, that would be very helpful in the current environment.”

Sports arenas are already offering sections for vaccinated spectators. Could designating a space for vaccinated diners help safety-conscious people feel more comfortable dining indoors? “Restaurants could create a private space for these individuals,” says Relu Stan, CEO of Fulton Market Hospitality in Chicago. “Knowing that guests are surrounded by staff that are vaccinated, (they) could feel safer. The ultimate goal would be to give staff and guests peace of mind.”

On one hand, that’s not all that different from offering a VIP lounge or smoking versus non-smoking section; however, it could be viewed as a segregation of sorts. “Can you really have a situation where a restaurateur offers the space on the left to the vaccinated and the space on the right to the unvaccinated?” Rubinstein says. “My fear is this would translate into a two-class system.”

Lou Flores, general manager of IGC Hospitality, which operates The Wilson at INNSiDE New York Nomad, says that the intel collected by digital health passports could be helpful. “It would be beneficial to see the percentage of guests who dine with us that are vaccinated,” Flores says. “We can see if those high or low numbers have any effect on an outbreak within our space.”

With vaccinations increasing nationwide, operators are wondering how long this kind of identification might be needed. “The unknown here is, now that we have a vaccine, is COVID going to become more like the common flu where it’s just dealt with that way, or is it going to continue to be this scary monster where you need something more official, like a passport for proof?” Spatafore says.

Though experts anticipate that vaccinated people are less likely to transmit COVID, whether or not that holds true will take some time to bear out in studies. And because vaccines aren’t universally available worldwide – and not everyone chooses to vaccinate – we will likely continue to rely on testing to safely go about public activities.